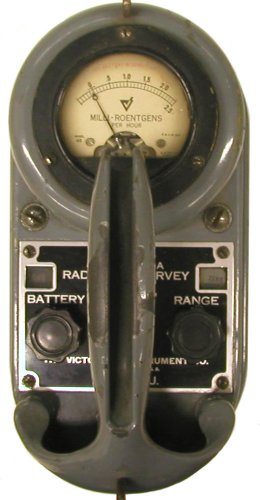 From my book Nuclear Bodies:

In a meeting of the Subcommittee of the S-1 Executive Committee (formerly the Uranium Committee of the US government’s Office of Scientific Research and Development) in October 1943, several of the top scientists overseeing the Manhattan Project considered methods of weaponizing radioactive particles in warfare. One method would be to spread large quantities of radionuclides peppered in a “chemical carrier,” to expose troops to high levels of gamma radiation. Because of concerns that wind might disperse the material before a fatal or harmful dose could be assured, the committee considered methods of compelling internalization of radioactive particles: “A somewhat different use or [sic] the radioactive material would depend on the fact that extremely small quantities of certain of the radioactive elements appear to be absorbed in the lungs of animals and produce fatal effects after a period of some weeks. The amounts necessary to produce eventual death under such conditions are extraordinarily small.” This section of the report, titled “Radioactive Gas Warfare,” detailed how to facilitate the inhalation of these microparticles: “This means that if such materials could be kept in the air in the form of a fine dust or smoke in concentrations as low as two thousandths of a microgram per liter, inhalation of such atmosphere for one hour would be sufficient to establish a lethal concentration; the material would accumulate in the lungs and the individual would eventually die of the radioactive poison. There is no known way in which such a contaminated individual could be successfully treated once he had thus’ [sic] been exposed.”

Knowing this means of harming human beings, and its utility in warfare, Allied commanders anticipated that Nazi German defenses against invasion on Normandy Beach (and other locations) might include "salting" the sand of the beaches with uranium to sicken and impede an invasion force.

To prepare for this possibility, Operation Peppermint was established, which subsequently outfitted special units that came ashore on June 7, 1944 with early models of Geiger Counters manufactured by the Victoreen Corporation, "The Model 247 was designed as a more rugged, waterproof version of Victoreen’s first ion chamber survey meter, the 'little black suitcase.' It was developed and produced in large quantities during World War II as part of the highly secret Operation Peppermint. Operation Peppermint’s mission was to counter the potential use of radioactive materials by the Germans against the Allied invasion of Europe."

General Eisenhower and his staff received briefings on radiation hazards from Manhattan Project personnel in preparation for the invasion. While no radioactive material was discovered during the D-Day operation, this history provides a clear understanding of US military officials of the harm that could be caused by being immersed in a radiologically contaminated environment. This is the same means of exposure that millions would face from radioactive fallout clouds spreading downwind during the decades of atmospheric nuclear weapon testing, after nuclear accidents such as at Chernobyl and Fukushima, and around nuclear production sites such as uranium mines and plutonium production reactors. Invariably these exposures would be downplayed as of no health concern.

This dismissal began in the studies of the hibakusha in Hiroshima and Nagasaki. Again, from Nuclear Bodies:

While these pathways for radiation and dire health effects were known early in the Manhattan Project, they were considered irrelevant when assessing the effects of radiation on the hibakusha in Hiroshima and Nagasaki, who had clearly spent days and weeks immersed in atmospheres containing aerosolized and deposited radionuclides.

The US government demonstrated a clear understanding of the health impacts of internalizing radiological particles when used as a weapon even before they had achieved a nuclear fission weapon. Yet they also continually dismissed those health impacts after they had been the party exposing downwinders and hibakusha to just such radionuclides.