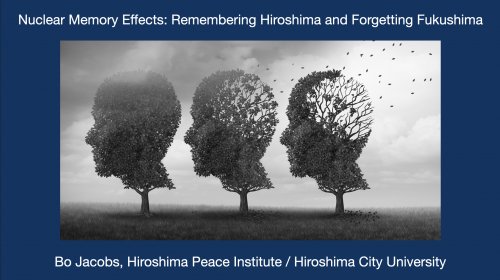 I was honored to be asked to present the keynote lecture at the Troubling Anniversaries Conference held in October 2021 jointly by the Institute for Historical Research of the School of Advanced Study at the University of London, and the Center for Public History at Queen's University Belfast. The conference brought together a fascinating cross-section of scholars and practitioners. All of the sessions are available online and can be seen here.

My keynote lecture explored memory culture in Hiroshima, and contrasted that with the invisibility of the global hibakusha. Much of that invisibility is the rooted in the medical models of harm from radiation built at the Atomic Bomb Casualty Commission, run by the US after the two nuclear attacks in Hiroshima and Nagasaki. Specifically, the Life Span Study (LSS), begun in 1950, built a robust database correlating exposures to external radiation by the hibakusha with later disease and early mortality. The study is incredibly powerful, however, it only considers exposures to external radiation. During the Cold War, millions of people would be exposed to radioactive fallout, and many would internalize radiative particles inside of their bodies. While the health risks that they faced were very real, they were not part of what was studied in the Life Span Study. Nevertheless, the findings of the LSS have been applied to their exposures and in almost all cases invoked to dismiss their health concerns and claims. This misapplication of a medical model is, in part, why people argue today about whether people living where the fallout descended in Fukushima are at risk or not.

These are all issues that I examine in much greater detail in my forthcoming book, Nuclear Bodies: The Global Hibakusha, due out by Yale University Press in March 2022. You can pre-order the book here.

Here is a video of the keynote lecture, the expansive response by Maurizio Cinquegrani (University of Kent), and the question and answer period.

Learn more about the issues discussed in this lecture in my forthcoming book.