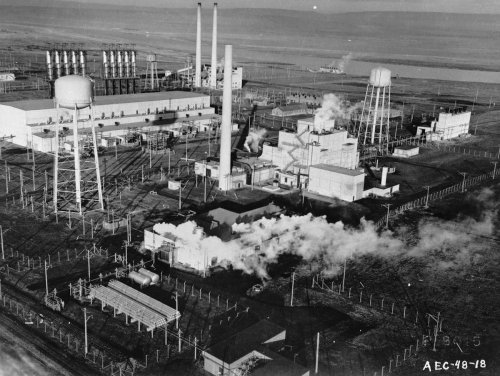 Trisha Pritikin is a native of Richland, Washington, the bedroom community for the professional class employees of the Hanford plutonium production facility of the US government in Eastern Washington. Hanford is where the first nuclear power plants on Earth were built in the 1940s. These plants were built to manufacture plutonium for the Manhattan Project, and subsequently for the bulk of the US nuclear arsenal throughout the Cold War. The production of plutonium, and specifically the separation of plutonium from the spent nuclear fuel rods of the nuclear plants resulted in repeated and significant releases of radioisotopes (especially iodine-131) and extensive contamination of communities and farmlands downwind from the plants.

Recently Trisha sat down for an interview with the Atomic Heritage Foundation, which is, "Dedicated to supporting the Manhattan Project National Historical Park and capturing the memories of the people who harnessed the energy of the atom." I really applaud the AHF for including among those voices people who can talk about the human toll and the health toll of some of the Manhattan Project sites, most of which continued on (as Hanford did) to being primary sites of nuclear weapon production for decades. These community's stories are elemental to the 20th century history of the United States.

Trisha's interview is below and deals extensively with the health legacies of the Hanford radiological releases, and the subsequent lawsuits on behalf of the communities downwind from the site. Along the way she describes some of the timing and substance of the acknowledged releases from the Hanford site, and some of the ongoing problems facing both downwinders and the current workforce. (Full disclosure: I serve as a board member of CORE -Consequences of Radiation Exposure- an organization working to support and educate the public around the history of Hanford and other locations of radiological contamination. Trisha is the President of CORE, and a good friend and colleague).

Trisha's book, The Plaintiffs, is currently in revision and will be published next year. Tune in here for info as the book becomes available.

A full transcript of this interview can be found here.

The next CORE board meeting will be held jointly with a number of organizations of downwinders from the Nevada Test Site, to be held in Cedar City, Utah, the site of massive sheep deaths after the passing of a large fallout cloud from a nuclear weapon test in the spring of 1953. Please check back to read about that meeting in September.