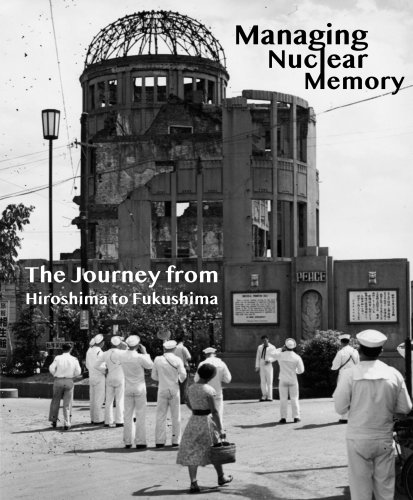 Managing Nuclear Memory: The Journey from Hiroshima to Fukushima

I will be in dialogue with scholars Norma Field and Yuki Miyamoto for an online discussion that you can join via Zoom next weekend, in part commemorating the nuclear attacks on Hiroshima and Nagasaki, but also exploring the public management of nuclear understandings since then, especially as relates to Fukushima, and the Global Hibakusha.

The anniversaries of the nuclear destruction of Hiroshima and Nagasaki serve as somber dedications to those who lost their lives in these tragic events. Such rituals of remembrance are inevitably selective about the aspects called up for reflection and can even encourage forgetting, by declaring the past as overcome and therefore, truly past. This webinar will explore the ways in which the 75th anniversary of the atomic bombings of Hiroshima and Nagasaki mark not a tragic past now diminished by time, but the inception of an ongoing struggle to discern the meaning and continued significance of nuclear technologies in the world we inhabit today, as it defines state power and continues to threaten mass destruction on a scale that far exceeds that visited upon Japanese cities in WW II.

Our commemoration of the 75th anniversaries of the nuclear attacks on Hiroshima and Nagasaki is marked by the disruption and uncertainty that COVID-19 has brought into all of our lives. While attempts to sanitize perceptions of the radiological disaster in Fukushima through Olympic spectacle were subverted by the pandemic, this management of perceptions around nuclear issues has, since Hiroshima and Nagasaki, been a primary feature of how we imagine the world riven by pending nuclear conflict and the long-term effects of the byproducts of nuclear energy. From the rhetoric of “Atoms for Peace,” that attempted to demarcate an imaginary line between nuclear power and nuclear weapons, to the dismissal of harm to those exposed to radiation from nuclear testing, production and accidents, the nuclear gambit has always been veiled behind a rhetoric that justifies, at any cost, its continued existence.

In this 75th year since the atomic bomb forever altered the destiny of Japan and set the world on a nuclear path - the 1st time that public commemorations will not be staged due to the viral pandemic - this webinar will take a hard look at how we experience and remember nuclear disasters, and what we can learn from this history to better understand where we came from and where we are going, and how we can best care for one another along the journey.

Norma Field is a professor emerita, University of Chicago, Department of East Asian Languages & Civilizations. She is the author of In the Realm of a Dying Emperor: Japan at Century’s End. She is editor and co-translator of Fukushima Radiation: Will You Still Say No Crime Has Been Committed? With Yuki Miyamoto, she maintains the Atomic Agewebsite.  About Dr. Field.

Robert (Bo) Jacobs is a historian of science and technology at the Hiroshima Peace Institute and Graduate School of Peace Studies at Hiroshima City University in Japan researching the history of nuclear technologies. He is the author The Dragon’s Tale and Nuclear Bodies (forthcoming in 2021 in Yale University Press), and also has been the lead researcher of the Global Hibakusha Project since 2010, conducting field research at radiation affected sites around the world. About Dr. Jacobs.

Yuki Miyamoto is Associate Professor in the Department of Religious Studies at DePaul. The courses she regularly teaches at DePaul are “The Atom Bomb Discourse” and “The Atomic Age.” She has led two-week study abroad trips to Hiroshima and Nagasaki seven times since 2005. She is the author of Beyond the Mushroom Cloud: Commemoration, Religion, and Responsibility after Hiroshima (2011).
About Dr. Miyamoto.

Webinar hosted by: The Institute of Contemporary Asian Studies of Temple University Japan.

For more information contact the ICAS office or send me a message at the contact link above.